High School Reunion: The Sh*t That Was 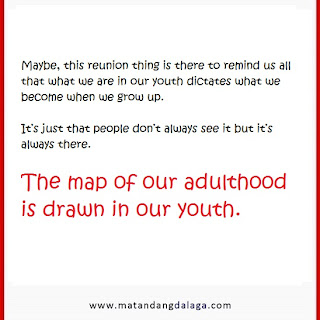 Who got fat? Who got hot?

Who succeeded? Who failed?

Who got married to a prince/princess? Who had babies and skipped the marriage part?

What happened to the valedictorian? To that girl/guy who thinks he is smart? To that ugly friend in a group of popular ones?

Admit it or not, those are the reasons people go to reunions. The surprising thing is that the answers are rarely ever the expected ones. Even if the valedictorian ends up working a high-paying job, he is most likely working for one of the high school losers or geeks who were bullied hard.

Even if the ugly girl remains ugly, she most likely found someone who finds her pretty and makes her happy.

Click here to read "Things I Wish I Knew When I was in My Teens".

Even if the jock remains hot, there is probably some guy no one remembers who ended up being a model.

Our religious valedictorian got pregnant in her junior year in college. She skipped a semester to have a baby. She continued her studies and is now a lawyer but she moved to another country where she can’t practice her profession. She settled for another work. It pays a lot.

The school bitch is still a bitch. She gossiped about everyone and asked everyone straight to the point prying questions meant for her to know just how much someone failed. It’s just that she’s also pathetic because she hasn’t grown up a bit and because almost everyone did,  she became beyond childish. She was straight up pathetic. Everyone seems surprise but somehow, it feels it makes sense for her to be like that because she has always been like that.

Click here to read "Things I Wish They Taught Us in School".

The two jocks threaded different paths. One is now a devout family man, working abroad to raise his family. The other jock married a beautiful woman, took her money and divorced her. The first one is now overweight but happy for the most part. The second one is even happier but still not contented. He is still hot. I never thought he is like that by my friend reminded me he also pursued her for sex. He has always been a user.

Our math wizard was the smelliest in the class. He is still smelly and still a math wiz. He works for the Micrsoft doing some math wiz thingie. He is married with three smelly kids. His wife doesn’t smell. I didn’t know it’s possible for someone like him to produce three smelly kids and have a non-smelly wife and my friend told me I was stereotyping too much.

The skinniest guy, who was also the leader of all things trouble, is a Physical Trainor. He guns puffs so hard, I wanted to buy him a new shirt. I didn’t know he could be that big but my guy friend told me he had the bone structure, I simply didn’t notice it then. He is married just got married to someone 15 years his junior but he is having an affair to someone who is 15 years his senior. It balances it out.

Then there’s the ugly duckling who decided she was going to be hot and became one. She is now beautiful, married with three kids and lives in a mansion outside of Rome. No one saw it coming except her. She said she always knew she’s pretty.

Then there was my crush. He didn’t even know I had a crush on him. He is married now but has not kids. He has some kind of a business that affords him and his wife a pretty comfortable lifestyle. I still find him cute but not as cute as I remember him to be. He was still talkative and he still didn’t notice me. He went to every table to talk with everyone and that included ours. He said “hi” to me but didn’t that was the beginning and end of our conversation. He was a little annoying, maybe because he was a little drunk but everyone said it’s because he is an arrogant bastard which I didn’t remember him being.

Maybe, this reunion thing is there to remind us all that what we are in our youth dictates what we become in adulthood. It’s just that people don’t always see it but it’s always there. The map of our adulthood is drawn in our youth.
30 and single matandang dalaga matandang dalaga funny stories old maid pinoy culture