When a Goodbye is Really a Goodbye 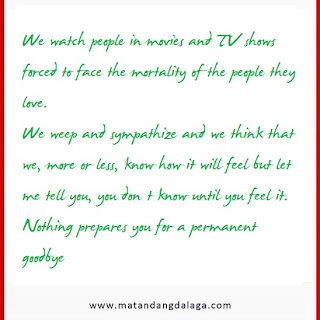 I am leaving in a month. I’ll be gone for some time. If things go as planned, I will be away for at least three years. I’ll be in my mid 30s by the time I come back. It’s a temporary goodbye for me because I do think I will come back. I have no intention to do otherwise.

But it is customary to still say a “temporary goodbye” to some people like family, relatives and friends. It’s not supposed to be entirely sad until it is.

I have a friend with HIV. We have been friends since 3rd grade. I was there when he started getting confused about his sexuality, when he first admitted to someone that he has a crush on another guy and when he finally admitted to himself that he is gay. He was there when I first had my boyfriend and was happier for me than I was for myself to finally feel the elation of falling in love. We were there for each other during breaks ups and make ups.

Like many long time friends, there were months when we wouldn’t talk but we both knew that all it would take is for a single text or a single email for the other to show up.

I will see him to celebrate his birthday a week before I leave and we both know it will most likely not be a temporary goodbye. We watch people in movies and TV shows forced to face the mortality of the people they love. We weep and sympathize and we think that we, more or less, know how it will feel but let me tell you, you don’t know until you feel it.