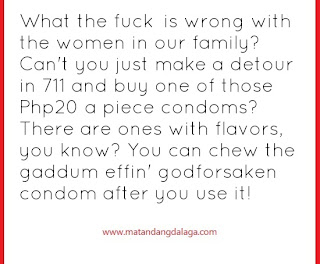 Who wouldn't be 30 single and depressed with this kind of freakin' family? I swear this family is designed to kill its members.

It's bad enough that one of our nieces got pregnant at 15 making us all grandmother and grandfathers well into our early 20s. It was horrendous, I contemplated disowning her. Last Christmas, I told the family I was going to leave soon and asked my nieces and nephews to not get pregnant before I leave. I just don't want to personally see another baby born into the family that isn't mine before I leave.

Read about the story on how I became a grandmother.

Considering 711 sells condoms 24/7, I was confident they'd agree to my request. Apparently, my request seems impossible to grant because another niece is pregnant.

What the fuc% is wrong with the women in our family? Can't you just make a detour in 711 and buy one of those Php20 a piece condoms? There are ones with flavors, you know? You can chew the gaddum effin' godforsaken condom after you use it!

The self-esteem camp doesn't stop there.

Another of our cousin, one of the few ones that remains married, apparently, is now separated but she doesn't think so.

For weeks, the husband hasn't come home and says he needs air. Apparently, their house is inside a zip lock bag. I am not saying my cousin is  stellar woman. She's kinda psychotic and really, if you grew up with her the way we did, knowing the husband decided not to stay with her isn't at all shocking. It's one of those news that warrants a "makes sense" response.

However, don't forget that the same blood is running through my body. If she has some of her in me, it gives the world a case on why I'm still not married, gadumit.
30 and single single life in the philippines tips from a matandang dalaga weird filipino family