How does God test people? 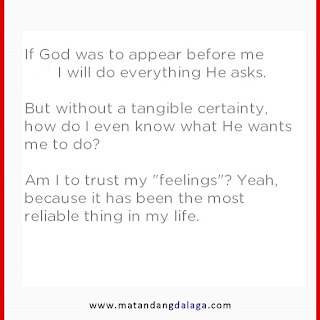 I wonder how this concept of  "God gives the greatest test to his strongest soldiers" works?

I'm not saying it's not true, I'm just... puzzled at the whole concept.

Is it right to "test" your partner's love or fidelity?

In fact, I wonder how much truth there is in all these concept of God testing his people. I understand how God the Father then tested Abraham and asked him to sacrifice his son. I don't want to start asking questions about the accuracy of the story but assuming it is true, had God not evolved in how He treats his people now?

I mean, if God was to appear before me and I have full certainty He is God, I will most likely do everything He asked mo do anything, I will do it because He is God.

To quote the Priest:

If I had certainty that there is God, I could take on all the agonies of the world and it will be alright.

If the story is a meant to be interpreted figuratively rather than literally, then how much of these "God testing people" concept is true. Personally, I don't see the point of testing the people I love. I don't see why I would have to test their loyalty to me or put them through something difficult to make them stronger.

But then again, I'm not God. I have no right over anyone but God has the right over everything.

I just don't know if He is the kind of God that would actually make things difficult for people to make them stronger. I mean, how does these all work?

"I'll make this guy an asshole, so he can break your heart and test your faith."

"I will make this guy an arson and he will burn half your face through a fire and you will learn how to see beyond looks."

Is that how it works?