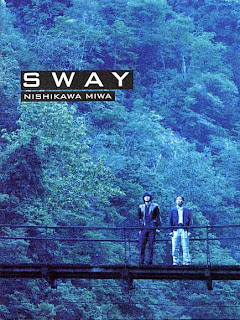 I love films and every now and then, when I have nothing to write or when I remember or just saw a really good film, I'll write about must see foreign films. This week, it is SWAY.

When Takeru (Joe Odagiri), a high profile and successful photographer in Tokyo, returns home to his mother’s funeral, he reunites with two important people in his life. Minoru (Teruyuki Kagawa), his elder brother who stayed behind  to care for their parents and run their small family business and Chieko (Yōko Maki), Takeru’s ex-girlfriend with whom he broke up with when he decided to pursue a career in Tokyo.

His return brings feelings of regrets, envy and resentment none of the three characters knew ever existed. Takeru was also surprised to learn that Minoru had feelings for Chieko.

Detachment from their Roots

Takeru's return highlights how he has become so detached from his roots. His leather jacket, strategically disheveled hair and dominantly black ensemble made him look like a high fashion celebrity. His brother in plaid shirt and worn out khaki pair of pants looked dejected and trapped.

Takeru talked and acted with such as sense of abandon while he constant smokes American Spirit that became a clear statement who detached he felt from his roots. On the other hand, even his brother who has lived there all his life feels has successfully emotionally detached himself from that life.

It is that sense of detachment that fuels the fire.

Chieko regrets not going with Takeru while Minoru felt Takeru got to pursue his dreams and he got stuck in the country. The three of them returned to a wooden bridge hanging over a river they used to go to but never crossed when they were kids. When Takeru crossed the bridge, Chieko wanted to follow but she’s scared of heights. Minoru asked her to come back.

Takeru was already busy taking photos of the stunning sights on the other side of the bridge when he heard Chieko screaming. He ran to find her dead on the river below. She fell and Minoru was screaming. Minoru's regret of his fate becomes the "motive" that convinced some pushed him to kill Chieko.


One great reason why this deserves to be my must see foreign films recommendation is the use of symbolisms. The bridge was the turning point. Takeru was the one who crossed the bridge and enjoyed the beautiful scenery on the other side of the. On the other hand, Chieko's and Minoru's fear of heights trapped them. It was a cell they put themselves into. Their fear of heights is their fear of change. Nestled in the protective silence of the province, they weren't willing to risk the security it brings for an unsure future.

Takeru's return was a proof of how much they were wrong to make the choice they made. When Takeru crossed the bridge, Chieko was hell bent on following because she didn't want to lose out on the opportunity again which caused her life and the "life" of Takeru and Minoru.

Takeru was asked to testify against Minoru but as he recall the events on that day, the audience will realize how difficult it is for all these family members to view each other objectively. Takeru’s recollection of all the day’s events almost becomes impossible as his seeming hatred of his roots clouds his view of his brother.
Three fourths of the movie happens in the courtroom but the conflicting, intersecting and clashing details of the immediate and distant past melds perfectly and grippingly that it becomes impossible to let go. Eventually, the convincing guilt of Minoru becomes is transferred to Takeru.

It’s a perfect way to represent how emotions and memories can alter how people see truths.

Trivia: This movie almost made Odagiri retire from acting, believing he can never encounter a script as good as this one. It's deserving to be my first must see foreign films recommendation.