We Suck at Relationships 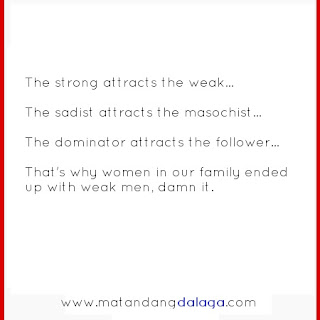 On my father side, the generation before us has or had solid relationships. There are six of them siblings and all of them are still with their partners. The second one is already a widow, proving true to their wedding vow, 'till death do we part'.

It's quite a feat considering life hasn't been easy on them. From childhood 'till much of my college years, one four families were sharing one bathroom and restroom. I don't know how we survived thinking about it now. We were poor and I mean poor. Apparently, the poverty made them stick together even more.

"Be worth the mistake."

I also know for a fact, some of them weren't completely faithful but I guess people decided to go beyond their limitations to make it work.

The result is this, a relatively peaceful lives with their partners now that the "children" are all grown up. Us cousins are all way past our 30s. We have our own lives now and they are left to enjoy the grandchildren and a life with each other without the kids.

With a solid example like them, you'd think that we would get our acts together and follow their footsteps or learn from them. Apparently, that's not how we roll. There are 20 of us:

3 of 8 female cousins are still with their husbands and 1 of those two is with the 2nd husband while the other has a confusing status.

Click here to read more about roles in a relationship.

I blame our parents. Women in our families were brought up to become powerful, assertive and independent women. And we are. We have stable careers, we are fighters and we go for things we want... and we make to apologies for it.

The problem is that domineering people attract submissive people. We end up with men that are weak, men that rely on other people, men with weaker emotional disposition and also poor intellectual quotient. I'm not kidding, these men are not just bad academically, they had low IQs.

The end, as you can see, is disastrous. Eventually, females in the family realize they can't become both the father and mother of the family. I know... I know... we should have known we were getting together with weak men. We're adults and are perfectly capable of being able to analyze the situation and realize these are weak men.

I just want to blame our parents just for the heck of it.

The strong attracts the weak...
The sadist attracts the masochist...
The dominator attracts the follower...
That's why women in our family ended up with weak men, damn it.
30 and single single life in the philippines weird filipino family