When I Became a Grandmother 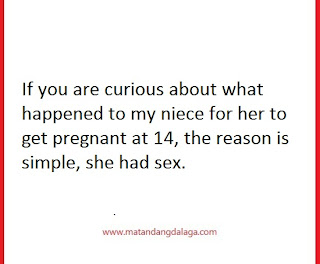 “Damn, it must suck to be you right now,” my cousin told me.

“Because you became a grandmother before you become a mother,” he said.

One of our nieces got pregnant at 14. She was in high school. One of my cousins was in London then, working as a chef. When we called him up to tell him the news he said “Slap the bitch for me… the f&*% is she thinking making us grand parents?”

I’m already having trouble finding a date as is, imagine how it’s gonna be now that I am a grandmother? Imagine subjecting a guy to the thought that he is about to kiss a grandmother? The f*%$!

At that time, I had another cousin who was still single so we, at the very least, comforted each other. He got married three years ago, I’m inconsolable and occasionally humiliated.

If you are curious about what happened to my niece for her to get pregnant at 14, the reason is simple, she had sex. The entire clan, sort of, knew she was already doing it because she was living alone in a dorm and her boyfriend frequented her place.

I suggested to my parents to sit my niece down and teach her about condoms and pills. They didn’t want to do it because they felt it’s like we are agreeing to what she is doing.

The result, she got pregnant and I am a grandmother.

My niece’s mother (my cousin) was working in HongKong then. She has four children and since my niece (the one who got pregnant) was only 14 then, naturally, she had to work finance the child too. apparently, the father didn’t have any money to support the children.

Naturally, the entire clan went berserk and threatened the boy to leave my niece alone. After one years, my niece was pregnant again… by the same effin’ guy… coz we’re just great at disciplining our younger generations.