When Are You Getting Married 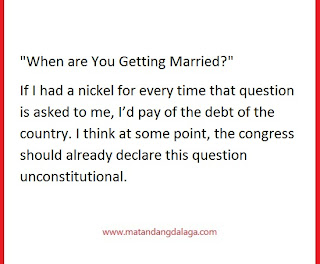 If I had a nickel for every time that question is asked to me, I’d pay of the debt of the country. I think at some point, the congress should already declare this question unconstitutional.

For the love of god, when are people going to realize that asking someone when they are getting married is just like asking a woman what her waistline is. There really isn’t anything wrong with it but there’s so many emotional repercussions with consequences that could piss off a woman any man knows that you would rather the US drop another A bomb on your ass than piss off a woman.

Through the years, I have learned that if I kill everyone that asks me that, everyone within 1 kilometer radius wherever I go will die.