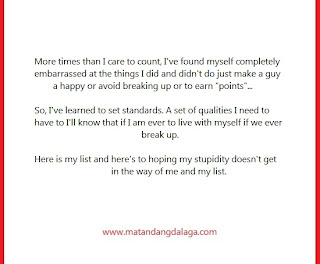 One thing I realized after being single (not married) for more than three decades is that there is no one else that is harder to live with than myself.

God knows there were many nights when my evil conscience almost gave up on me, disgusted at the situations I put myself into, revolted that the decisions I've made. Most of the time, those revolting decisions involved men and relationships. I've done things or allowed things to happen without really thinking about how it will affect me in the future or how it will make me feel when the relationship is over and I'm over the guy.

More times than I care to count, I've found myself completely embarrassed at the things I did and didn't do just make a guy a happy or avoid breaking up or to earn "points". I've found myself thinking what the hell was I thinking and beating my head for being so stupid.

I know you have.

So, I've learned to set standards for myself and for the relationships I will have.  Standards are consistent. Long after these b@st@rd j3rks are gone, standards will remain. And so here is my list and here's to hoping my stupidity doesn't get in the way of me and my list.

Do you have a list?
matandang dalaga old maid pinoy culture single life in the philippines