Earning A Lot More Than The Guy, Is It Really Not An Issue?

We’ve all heard it before, how money shouldn’t be an issue in relationship. Love is supposed to conquer all and it is also supposed to be enough of a reason for two people to continue working it out.

It is not hard to believe. There are many couples who really started out with nothing and ended up with more than most at some point in their life. There’s Manny and Jinkee Pacquiao who had to shack up with their in-laws for several years before Pacman started hitting it big. I know a female TV producer who is married to a doctor. She was the provider for more than a decade until her husband became a specialist. It is only recently that the tables have turned in their household. My female cousin was already earning a 6-figure salary when she met her now husband who was then barely making 20,000.

I was already working when I met my first boyfriend who was older but was still in school. I didn’t mind paying for most of our dates. I was in love and I always believed money should never be an issue. I broke up with him when it became clear he would never catch up.

I would be lying if I say money was not a factor. The fact is that it was because money, fortunately or unfortunately, is an effect or a result of things that actually mattered.

Unless a guy is a Jose Rizal who is trying to free a country under foreign oppression or a Ninoy Aquino who is trying to free a country under the tyranny of a dictator or a Mahatma Ghandi… you get the drift… every ambition leads to money. If after 20 years a guy still can’t afford to, at the very least, constantly split the bills, he is either not as good as he should be in his job or does not have enough of an ambition to make him work harder.

But I don’t take well a man who lets a woman pay all the time. It is okay for a man to not shower a woman with diamonds but it is not okay for a man to be a burden to anyone else. If you don’t have money to pay for a $50 steak, visit a girl home and order McDonald’s.


I like traveling. I like exploring cultures, meeting new people, tasting strange foods, learning a new language, and seeing all the great places God has perfect ‘architectured’ for the world. I like watching shows, watching sports games, and experiencing new strange and fun things. I appreciate life and I show it by living it. And I won’t apologize for it. 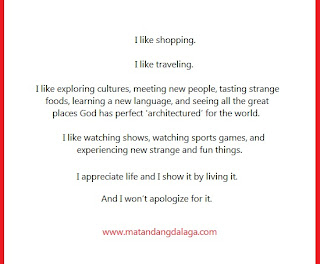 A guy should never put me in a situation where I will be forced to hold back on the things I want to do because he can’t afford it. The other option is for him to let me go do things on my own but that would mean I get to grow faster or grow with someone else.


Then there are all those little things that could add up and become a big thing in the end. When romance fades and reality of life settles in, the bills stack up, school expenses of the kids start coming, the house needs repair, and there is not a dime left to buy a decent bottle of wine, small things are compounded and things that never really mattered come into play.

I know that money is an iffy subject to many. It was to me but being a matandang dalaga has a strange way of putting things in perspective. Unlike other people, I am not outstanding at what I do. I am, at best, an average writer. I am, at best, an okay speaker. I am terrible at interpersonal skills and I am certainly not pretty but it didn’t stop me from working hard so I can live a good life and give my family a better life than the one they lived before I started working.

I know the person that I am and I know what I can give in a relationship. If a man wants to be with me, he needs to deserve to be with me.

This is not to say I would never go out with a guy who earns less than I do but I wonder if there is a threshold. How long should I wait until I break up with him? Is there a limit to the gap?
matandang dalaga old maid pinoy culture single life in the philippines