Quitting Your Job in Your Mid 30s


I was a job hopper. I didn’t stay for more than two years in my younger days. I worked for the former President, then for a TV station, then for a non-profit organization, then for a school, and then for a mobile content provider. I finally made a long stop in an advertising agency. I was in the Account Management department for more than five years handling high-profile clients.

I enjoyed the people I worked with but I hated the job. I was surrounded with bosses who stuck their claw in every high profile project even if they didn’t have anything to do with it. Day in and day out, the bosses kissed the asses of clients who were also just kissing the asses of their bosses. We weren’t in the bottom of the food chain but we were pretty low, low enough that we needed to make ourselves believe we were doing something important in the interest of keeping ourselves sane.

I missed birthdays, holidays, important events of family and friends just to make sure the print ad FA gets delivered to the newspapers in time. I became moody to family and friends because there was no other way to relieve my stress. I had the money to pay for a massage but I didn’t have the time.

But those things were not the trigger that made me quit. 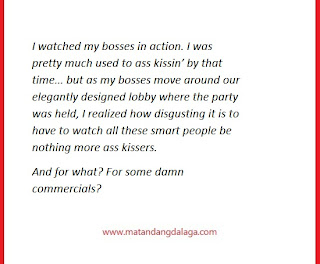 I admire my bosses in the agency. I think they are smart. They are power players and power trippers but smart and I respect smart people.

One time, a client visited the office. As expected, our bosses went into full asskissin’ mode. They held their champagne glasses the right way, wore their Sunday best, added an extra layer of make up to their already triple padded face, and spoke in an irritatingly weird English accent.

I watched them in action. I was pretty much used to ass kissin’ by that time. I was in Account Management, ass kissin’ is the most important part of my job but something about that night suddenly struck me. As my bosses move around our elegantly designed lobby where the party was held, I realized how disgusting it is to have to watch all these smart people be nothing more ass kissers.

And for what? For some damn commercials?

There isn’t even a higher purpose to what we were doing. We were nothing more than professional bullshitters and overpaid butlers.

Don’t get me wrong. I don’t hate marketing and advertising but it doesn’t change what I think marketing really is - bullshitting.

It was the night I decided that if I am to continue walking down the filthy road of advertising, I might as well be the one whose ass is being kissed.

So, I quit. At 32, I quit. I was in the middle of paying for two cars and putting a niece through college. I quit.

We all know that in the Philippines, 34 is, well, a matandang dalaga. There was a smaller chance of me getting a new job and get the salary that I want but who gives a fine f&$#? I have been working since I was 16 and there was no way I can do it for another 16. I was either gonna suffer now or self destruct later.

And so here I am, a year into self-employment, I still have my car and will soon move to another country by next year but while I am here, I get to do what I like, write and do some production work for movies, like below: 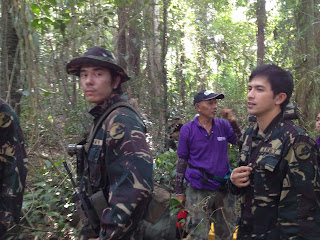 I’m still doing marketing and advertising but I only do projects I like with the clients I like. There’s no way I’m gonna kiss anyone’s ass ever again.  If they don’t like what I’m offering, they can go f*%^ their ass.

I’ll make the most out of the last several months I have left here by doing what I love doing. I’m not really worried about it for as long as happy with my right now.
matandang dalaga old maid pinoy culture single life in the philippines