Still Living With Your Parents? 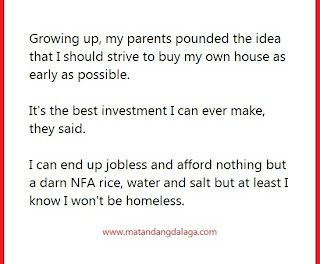 Growing up, my parents pounded the idea that I should strive to buy my own house as early as possible. It's the best investment I can ever make, they said. I can end up jobless and afford nothing but a darn NFA rice, water and salt but at least I know I won't be homeless.

I took their advice.

Two years after graduating, I made a downpayment to a house and lot. It took me 10 years to pay it off. It's 160 sq m in a low cost housing subdivisio. When I bought the house, I was earning Php 16,000 a month. Php13,000 went to the house. I couldn't even afford to have dinner. I'm freakin' serious, I was eating twice a day. Once a day if I need to spend on something. A nice park was 15 minutes away from my house, I couldn't event afford to get it, gaddumit.

I could very well move out and live on my own but my sister needs the financial support and I love my niece like a daughter, I want to stay with her and help her in her studies any way I can. So, my sister and I are bound to irritate the holy hell out of each other until leave next year. 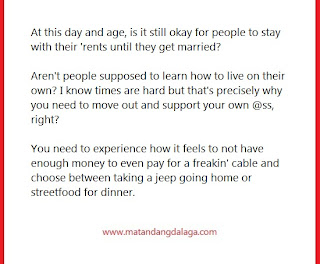 None of my friends (I don't have a lot) have bought their own house. Most of them spend on vacations, phones, computers, or cars. Of my cousins, two bought a house for their families. Almost all of them also stayed with their parents until they got married, except those who worked in other countries, of course. I was the only one who moved out after graduation.

It's an issue I often think about. At this day and age, is it still okay for people to stay with their 'rents until they get married? Aren't people supposed to learn how to live on their own? I know times are hard but that's precisely why you need to move out and support your own @ss, right? You need to experience how it feels to not have enough money to even pay for a freakin' cable and choose between taking a jeep going home or streetfood for dinner.

More importantly, you need to feel how it is to go home to an empty box, hear nothing but silence when you are in desperate need for some noise to distract you, have no one but you before you go to bed and know how it is to survive on your own. 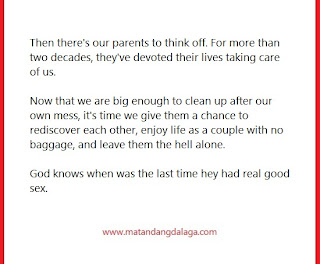 Whenever I meet guys and learn that they are still living with their parents, it turns me off. Grow a pair will you?

It's the same with girls. I feel they should stop using their gender as an excuse.

Then there's our parents to think off. For more than two decades, they've devoted their lives taking care of us. Now that we are big enough to clean up after our own mess, it's time we give them a chance to rediscover each other, enjoy life as a couple with no baggage, and leave them the hell alone. God knows when was the last time hey had real good sex.