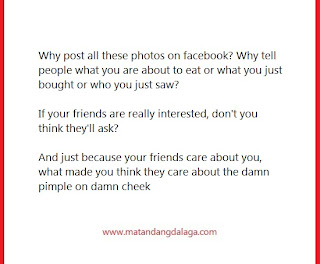 I remember reading a book by Dale Carnegie titled How to Win Friends and Influence People. One of the things the most important tip I got from that book is to understand how people has the innate need to feel important. People, he said, go through life looking for validation. One way to make them like you is to give them exactly what they want, the feeling of importance.

Then there's that movie, Devil's Advocate, when Al Pacino's character said that vanity is his favorite sin.

It has since been stuck in my mind. People like feeling important, they like looking good, they like people paying attention to them, and they like being validated. It's probably why most people get married. People always need to feel they matter. A marriage is that, an assurance that someone promises that you will matter, that whatever you do, it matters to that someone... an assurance that no matter what happens in the future, someone will be there with you.

I have more than 600 friends on my personal Facebook page but if I add all the accounts I maintain for business, I would have more than 20,000 people in my direct circle.

Each day, I deal with people posting half-naked photos of themselves, photos of them in vacation, photos of the food they are about to eat, the new dress they bought, the dog they think is cute, the funny sign that made them laugh, the celebrity they saw that day, and others. If you have a facebook account, you know what I am talking about.

Everyday, I ask myself why. Why post a photo all those photos? Who is looking? Who is interested? If you are doing it to share it with your friends, why not limit it to your friends? Why contribute to the noise?

Is it because you don't care who sees it? You just want to post your photos or say what's on your mind for whoever cares? But don't you think it's wrong that you don't know who cares? That you have to open it up to the world and fish out for someone who would care? If they do care, they'd ask.

What made you think that people who care about you will also care about the damn chicken you are about to eat? Or that you lost 1 pound after 1 hour of Pilates? Or that your dog just learned to fetch?

Have you no pride to go out there and tell people 'Look at me, I'm having a good time' or 'I'm so sexy in this dress' or whatever?

And don't get started on the 'we're living in fast-phased world so I'm making it easier for my friends to keep tab' argument. Just because someone is close to you doesn't mean they care that you just finished watching Friends for the 10th time or that you just remembered your high school crush after hearing the new One Direction song. If someone cares enough to know what you are having for lunch, they'll ask. 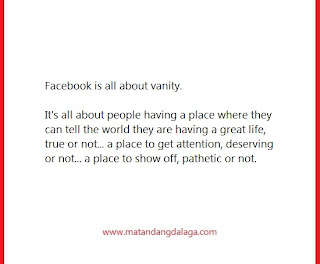 Some of these posts are public personalities or businesses. A few may really be doing it because they know their friends are interested but majority of what I see are just photos meant to brag about whatever they think will make other people envy their life, status updates that is meant to fish for someone's attention or say something about someone they can't say in that someone's face.