If You Want to Feel How it is to be Hot, Got to America 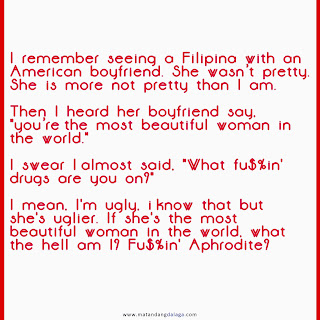 I used to be insecure and at some point I looked up and screamed at God and challenged him into a duel. I figured, I'm already ugly, it won't matter even if he beat me up, right? Nothing much will change.

There is something else I don't have that my cousins have, sex appeal... I think that's what they call it. I have a cousin with a 38 inch waistline, married and separated twice with 3 children and she still gets more suitors than I do.

Again, don't worry. I've come in terms with it.

About 15 years ago or so, I remember seeing a Filipina with an American boyfriend in a beach we went to. She wasn't pretty. She had thick lips, square face, high cheeckbones, black round eyes, and lots of corners in her face. As I've said, she wasn't pretty but the guy seems head over heels in love with her. I don't really eavesdrop but I couldn't help but hear them talking. He told her, "You're the most beautiful woman in the world."

I looked at them and I swear I almost said, "You have got to be kidding me! What kind of effin' drugs are you on?"

That bothered me and I ended up being an alcholic. Fast forward to five years ago when I first visited the U.S. I went to San Francisco. I was having coffee with some of our friends when someone came up to us. I thought he was going to introduce himself to my friend. But no, he introduced himself to me. He said he was watching me from afar and he really loved my smile. He asked for my number and actually asked me on a date. We went out, twice.

I went to Vegas too and the same thing happened. Guys introduced themselves to me. Some even ran from the other side of the street just to catch me.

I finally got to feel what my cousins feel whenever someone ran after them. So that's how it feels to be attractive... that's how it feels to have guys wanting you... and all the guys who approached me were hot... but then... my mind goes back to that moment 15 years ago... when I witnessed that American telling that woman she is the most beautiful woman for her... I remember her face and I realize - damn, I'm ugly.
30 and single dating after 30 in the philippines matandang dalaga old maid pinoy culture single life in the philippines