I Was the Getaway Car 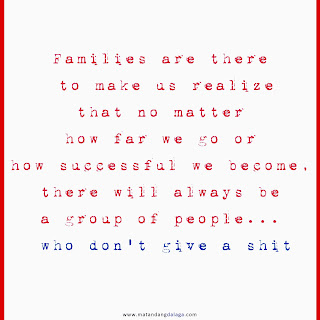 I was on my way to visit my bestfriend whose wife just gave birth.

It was a particularly lousy day. I woke up, brushed my teeth, made coffee, peed, messed with my laptop while drinking coffee... and off I went to visit my... I already said that.

No one was around which meant I had to take the car out, park it while I close the gate. Our dog, which is not really mine but my cousins', was begging for food. I made a mental note to bring him some chicken or whatever. When I went back to my car, my auntie asked me if my cousin (her son) could hitch a ride.

I was a little surprised that he was home. I didn't even know he was back in the country. He is a seaman.

It was cool. I waited in the car and after about five minutes, he finally came out with my other cousin (his sister). They were hurrying which was cool for me too because I was getting late.

I thought it was sweet that he was reminding me but I also noted that he didn't even say hello and I haven't seen him in two years.

He then turned to talk with his sister and said something about some people looking for him. She responded and asked if it was the guy with a gun riding a bike and he said yes.

Then he turned to me and asked me not to stop whatever happens. I said okay but wanted to ask what I was supposed to do if someone stands in the middle of the road. I can't run him over, right?

So, my cousin (the girl) told my guy cousin to not go home and just rent a place for a month or two or go to their other sibling. She said they'll take his stuff there because it's more dangerous if he is around.

I was ready to ask what it was about when he turned to me and asked if I can drop him off where he can easily get a cab and where there aren't many people around. I said sure.

He turned to my girl cousin again and said something about not holding the gun. He said that had he held the gun, they would have something by now.

I thought that's weird because he is running away and he seemed to be running away from those guys who had guns and he is asking me to drop him off somewhere that's isolated and he can easily get a cab.

I told him there were a lot of police officers around the area where we were at that moment and he said he is avoiding the police.

I drove for about five more minutes before we finally found a spot where there aren't a lot of people. He alighted with my girl cousin.

I just realized, I was his getaway car.