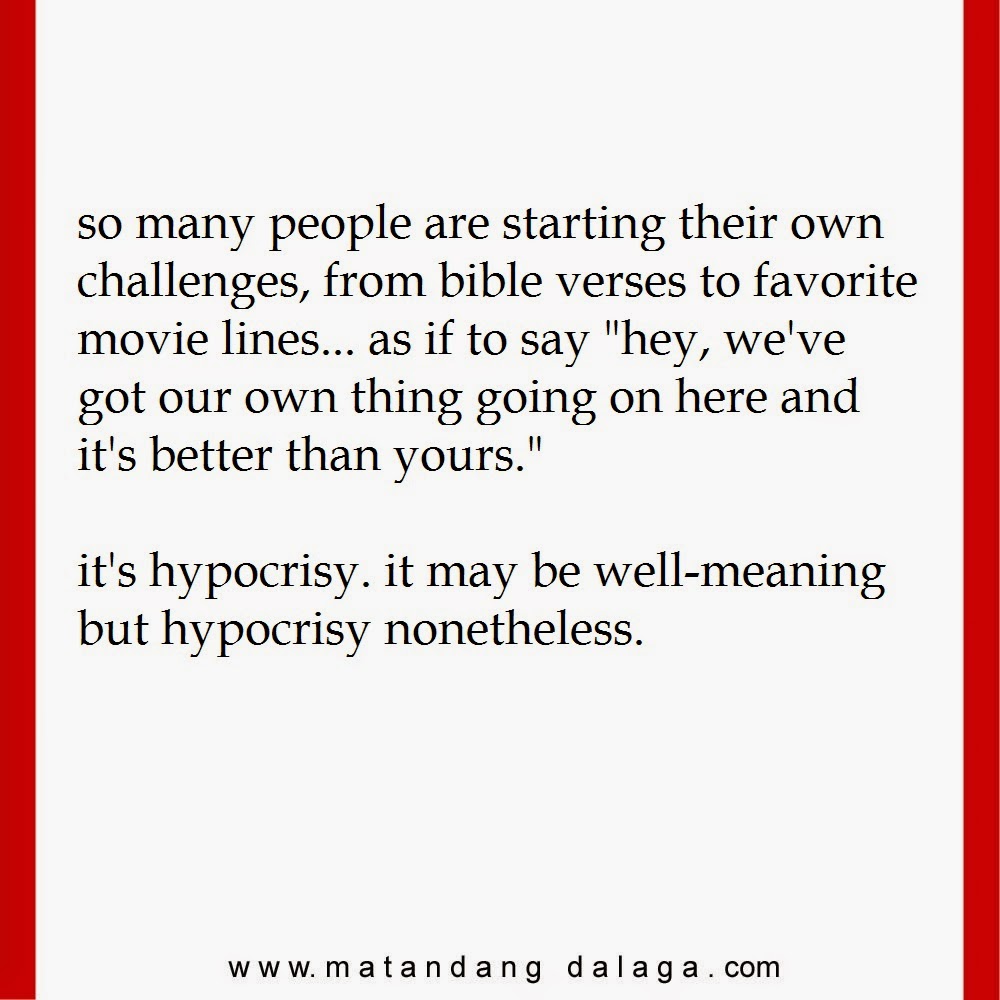 The Ice Bucket Challenge was meant to raise awareness AND FUNDS for the research of disease amyotrophic lateral sclerosis (ALS). It is a progressive neurodegenerative disease where the brain loses the ability to control muscles in the body. There is no known cure. Let us hope the the Ice Bucket Challenge contributed to the changing of that.

When the Ice Bucket Challenge started slowing down on Facebook, new challenges came in. I got an average of 5 tags everyday asking me to do different things, from posting my top 10 favorite movie villains to bible verses.

There is nothing wrong with the theme "challenge". It's not like it's harming people to post bible verses or posting things you are thankful for but everyone trying to start their own trends muddled up the whole spirit of tagging. When there is too much of something, the value depreciates.

It also irritates the holy hell out of the people who are forced to deal with this everyday.


The "polite" way of saying no challenges is to simply not do it. You don't want to say no in public so and since people will, more often than not, not keep tabs on who are getting tagged and who aren't doing the challenge but when someone close to you asks you specifically to do it, something supposedly as simple as that, how can you say no?

These people tagging other people should be, at the very least, aware of the fact that, unlike them, some people actually have a life outside of the facebook.


There is nothing wrong with using a trendy marketing tactic to put some attention to issues but Facebook is supposedly to allow people to keep in touch with friends and family. The challenges on Facebook are but a way to show off whatever it is they want to highlight, their taste, life, skill or faith.

Faith is supposed to be lived. Skills are supposed to be used for their craft. If you want people to know you value them, don't make them a part of list, tell them and show them. If you want to share about your faith, live it and have an intimate conversation.

There is nothing wrong with challenges but the theme must be carefully chosen. It should be a social issue not a personal matter.

Most importantly, if you want to exchange information with your friends, message them directly and ask them what you want to know, that's the whole point of Facebook. Don't ask them to direct their answer to the public.