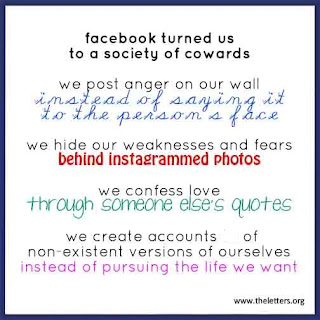 And this is what people have come down to... posting angry messages on Facebook that's obviously directed at someone but is made to appear as if it is a generic post.

Do they actually think that the people for whom the message is written won't figure out it is for them? And what are they planning to do? Deny that it's for them?

This is how cheap we have become? We can't tell someone we are angry towards them so we tell the whole world instead? It's cheap and it's classless.

If you can't say it in the person's face, then don't post it on your facebook wall.


This is what people have come down to... posting the most personal, intimate things in our life with so much detail and expect not to be judged for it?

Are you a special kind of stupid?


If you don't want people to get involved, then don't get them involved. Shut the fu$k up about your life and let them live theirs. The minute you broadcast your personal life is the minute you invite everyone to poke at your business. If you want "someone to listen" to you, call one of your friends and talk on the phone or in person, you don't go to facebook and hope someone will notice you.


And this is what people have become... a bunch of attentions whores who post cryptic status messages about some supposedly important thing judging from the apocalyptic message just posted but is obviously meant to bait the attention of anyone willing to get involved in the drama.

For the love of gawd, if your friends are real friends, you can call or text them and they will listen to you. No need to dangle your woes like it's a piece of meat in front of a pack of hungry wolves.


And this is what people have resorted to... post every mundane and absolutely stupid things starting from their lunch, dinner, snack breakfast, new shoes, new dress, dead nail, acne, armpit, cellulite and just about anything that, really, no one is interested in. You're not that important for people to want to know what you are having for your meals.