Prove People Wrong... But Not Too Much 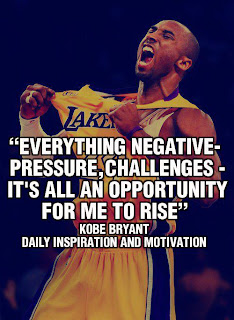 You know how all kids are naturally adorable, right? Well, I was probably a freak of nature because I wasn't.

My relatives in my father side particularly resented my presence. I don't know why. I was probably an irritating kid who did all sorts of irritating things and had a naturally irritating aura.

I remember one time when we went to my cousin's new place as they were moving in, we had lunch and I ended up sitting by the food. The next day, my mother told me that someone told her I kept on helping myself with servings that chicken even though I still had some on my plate.

I was fat, still am fat, but for heaven's sake I eat more rice. Give me a piece of chicken leg and I'll eat a bowl of rice. It's against my character! It would have been more believable if they said I kept on helping myself with more rice, guddamit.

Unconsciously, I used all those hate to motivate me to succeed. Hence, the Kobe Bryant poster.

I wasn't really aware I was doing it. It's just that in retrospect, I actually did.


I remember watching Karate Kid and wanting to get into martial arts. My sister said I can't and I shouldn't because I'm too fat. I went on to win a silver medal.

All my uncles and aunties hated CAT in high school, I became the highest ranking female officer in our school.

I was constantly ridiculed for being clumsy. I was fat, couldn't run, tripped all over and couldn't even climb the roof. I became a mountaineer, I run marathons, swam the open sea and I went on with Martial Arts.

There was one particular thing I that stuck to me. My uncle forbade his daughters from talking and playing with me because I was a flirt. I didn't even have a boyfriend until after college, his daughters had like 10 by the time they finished high school. He thought I was going to amount to nothing and wouldn't even finish school.

Finishing my Master's degree is the least of it. I have fulfilled all my dreams especially the part where I take care of my parents and give them an easy life. Sure, I'm Henry Sy but they are comfortable.

I am also still single and nearing my 40s. I think I overshot a little.
30 and single pinoy culture single life in the philippines