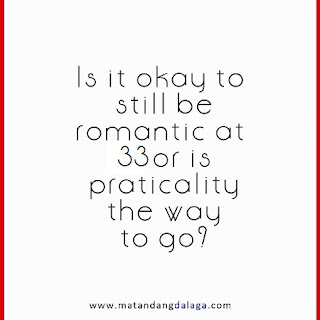 All these talk about February being a love month made me think about how much of a romantic I am or has remained or I am not.

I went to read some of the letters I wrote to my ex and realized that I was not a romantic, I was so darn corny it's not even funny. I wonder if people who are in love really do that. Do people that are in love lose their sense of shame and write stuff that are not even a fifth grader who just had her first kiss would even write. I freakin' cringe at what I wrote and if there is any way I could turn back time, that's the one thing I would change. Nope, I won't stop the US from dropping that bomb in Hiroshima. I would just hit my head so hard, it'll shake my brain and then threaten to do it again if I ever write those letters.

Those letters are the greatest embarrassment in my life.

However, I do acknowledge that AT THE TIME, it must have felt right which makes me wonder whether or not I am really a romantic or it's just love (or what I perceived to be love) that made me that way.

I don't know how to gauge it really. I just know certain things for sure.


I want the guy to pick me up at my house, do it like a perfect gentleman and get out of his freakin' car, ring my doorbell and ask for me. I want him to come inside my home, sit on our couch and wait for me.

After that, we'll take a walk somewhere. I want us to be able to talk like we're friends, no worries about saying something that shouldn't be said because it might imply that I'm expecting too much or whatever. I want to laugh a lot so that whatever happens after that date, at least we'll both know we both had a good time.

And yes, he has to take the tab.


I don't like chocolates. I prefer flowers but I don't want to get it everyday, only when there are special occasions.

I don't expect a guy to writer letters or send me romantic text messages but I do expect him to text me everyday if only to inform me he is alive and has all his limbs intact. Just one text would do it.

I don't expect a guy to be a Shakespeare but I expect him to want to talk with me when it comes to the most important things and events in his life.

I don't want to hear things from other people when it comes to him or our relationship. It's the two of us in that relationship,


I don't expect him to make me feel like a goddess . That's absolutely insane. It's okay for me if he checks out other women when he is with me for as long as the tells me. But I do expect him to open the doors for me, pull the chairs for me, hold my hand when we cross the street and all that jazz.

I don't expect to be surprised because I know men are just bad at that but I expect that he will make and effort to find out what I want when it's my birthday or when it's Christmas.

I don't expect him to parade me like a Miss Universe because I didn't win the genetic lottery to deserve that but I expect him to be treat me nicely in front of his family, my family and strangers.