Why Would a Girl Love Sports? 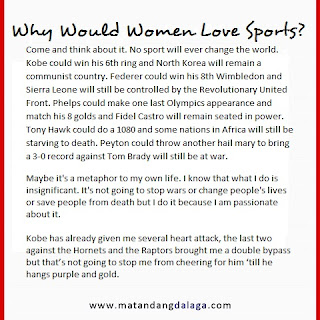 I remember watching a tae kwon do championship match in the last Olympics at 3am. Although I would have loved to watch all the games, my bed was calling out to me. I kept the tv on just as so I could witness whatever it is I could manage to watch before sleeping. Tae Kwon Do championship game was on. I don't even remember what country was playing. I just remember that neither player has scored by the third and last round and one of them was the underdog.

In the last 30 seconds, the underdog scored. His whole court jumped, screamed, yelled, pumped their fist in the air, hugged each other and started going down on their knees. I don't know if it was to pray or watch in anticipation the next 30 seconds.

I could feel the energy surge through the body of the underdog as he realizes he hit a clear 45. He looked at the clock. 30 seconds. All he has to do is keep his opponent from connecting a clear one for 30 seconds. It would be tough. When a great player is under pressure, the animal in him gets awaken. This is not just ordinary pressure. This is the gold medal we are talking about.

The camera focused on the opponent and you could see the fire in his eyes. He has 30 seconds to connect for a tie and he will do it... At all cost.

They shifted the focus on the underdog. He had focus on his eyes. He will do everything he could to keep him from scoring... That's what he did. He screamed, the loudest scream I heard of him in the match and went full berserk. He just gave it his all. He kicked... Met his opponent's leg... He used his arms and leg to block... He just gave it his gaddam all. He wasn't going to allow his opponent to score, not while he is alive.

At around 15 seconds, their legs met in the air, causing both to go down. They were ordered to stand up and in that moment, it was clear the underdog was the one hurt more. He couldn't stand up. His court was in full chaos. The referee was checking with the doctor and the doctor was shaking his head.

Then... The underdog stood up... Limping... Grimacing in pain. But he is 15 seconds away from the gold. If he doesn't get it tonight, he will have to wait another 4 years, he'll be in his mid 30s.

He yelled he was going to play. I don't know what happened... Maybe the referee and officials understood how he felt. If they were in his shoes, they'd lose a limb just to get that gold.

So they allowed him.

The clock begins and he screamed again... He attacks...  with all his might. He wasn't connecting but neither was his opponent. I don't think he was keeping track of the time... He just wasn't stopping... Even after the buzzer sounded. The referee had to go to both players to stop them... Both dropped to the floor.

The underdog got his gold.

I was elated, I didn't even realize I was standing on my bed. I screamed and cheered, even though I had no idea who those two players were.

There's something about watching someone give everything they have for something they love.

Come and think about it. No sport will ever change the world. Kobe could win his 6th ring and North Korea will remain a communist country. Federer could win his 8th Wimbledon and Sierra Leone will still be controlled by rebel groups. Phelps could make one last Olympics appearance and match his 8 golds and Fidel Castro will remain seated in power. Tony Hawk could do a 1080 and some nations in Africa will still be starving to death. Peyton could throw another hail mary to bring a 3-0 record against Tom Brady and will still be at war.

But that doesn't change the fact that I get involved in sports I don't even play or don't play well. I scream on top of our lungs, get into fights and pray like I have never prayed before for a team or a player I don't even know personally.

Maybe it's the player's spirit that gets me. There's something exhilarating about watching people lay down everything they've got just to win a game. They know it's not going to change the world but it doesn't matter to them because they love what they do.

Maybe it's a metaphor to my own life. I know that what I do is insignificant. It's not going to stop wars or change people's lives or save people from death but I do it because I am passionate about it.

Kobe has already given me several heart attack, the last two against the Hornets and the Raptors brought me a double bypass but that’s not going to stop me from cheering for him ‘till he hangs purple and gold.
30 and single matandang dalaga pinoy culture single life in the philippines