I'm Not a Power Player 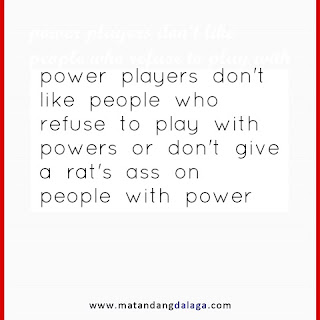 I don't know how I lasted almost ten years in the advertising industry. It's an industry full of sharks, evil fairy god mothers, bullshits and stupid whores who don't know they are stupid and don't mind being a whore.

I don't like the politics of it all. I never liked the politics of anything. I'm too upfront and impatient to bear with anything that will have no effect on the end product that I produce. I don't see the point of having to present every single deck to every single person above me. It's not like they provide any significant input.

I've been caught up in numerous battles because of it. I guess power players don't like people who refuse to play with powers, kiss ass or don't give a rat's ass. And most of the time, it's my "I don't give a fine fuck" attitude that brings me down.

I don't see the point of it all and it's that inability ability to see that point that gets me into trouble. Just recently, I was hired as a part-time marketing manager for a company. I was reporting directly to the owner and coordinated with the HR manager for schedules and other requirements. The HR manager then asked me if she could talk with our web developer and I didn't see anything wrong with it. Soon enough, she was directly coordinating with the Web Developer and the owner.

When the owner started bugging me about the development of the website, I was conflicted. I was either going to say tell him that the HR manager wasn't talking with me which will look like I'm not doing my job or just take the responsibility. I took the latter.

It was just the beginning. She then fired one of my staff without telling me and asked the web developer to do the opposite of what I wanted. She also started asking for the things I was doing so she can "approve it".

I could have gone to the owner to tell him what was happening but... I didn't want to look like I'm squealing or can't deal with the problem myself. The problem is that I can deal with the problem, it's just that I didn't want to. I don't see the point of dealing with someone like her. She's an adult, with a daughter in high school. If she got to that age with such an attitude, there was nothing I could do to change it. Besides, I don't think I would want to work with someone like her.

And the owner, on his part, should have the discernment to ask what was going on but he didn't which meant he wasn't worth it either.

I guess the problem is that there are too many fuckers in this world encountered by people like me who is not willing to give a single fuck.