10 Things I Wish I Learned Early 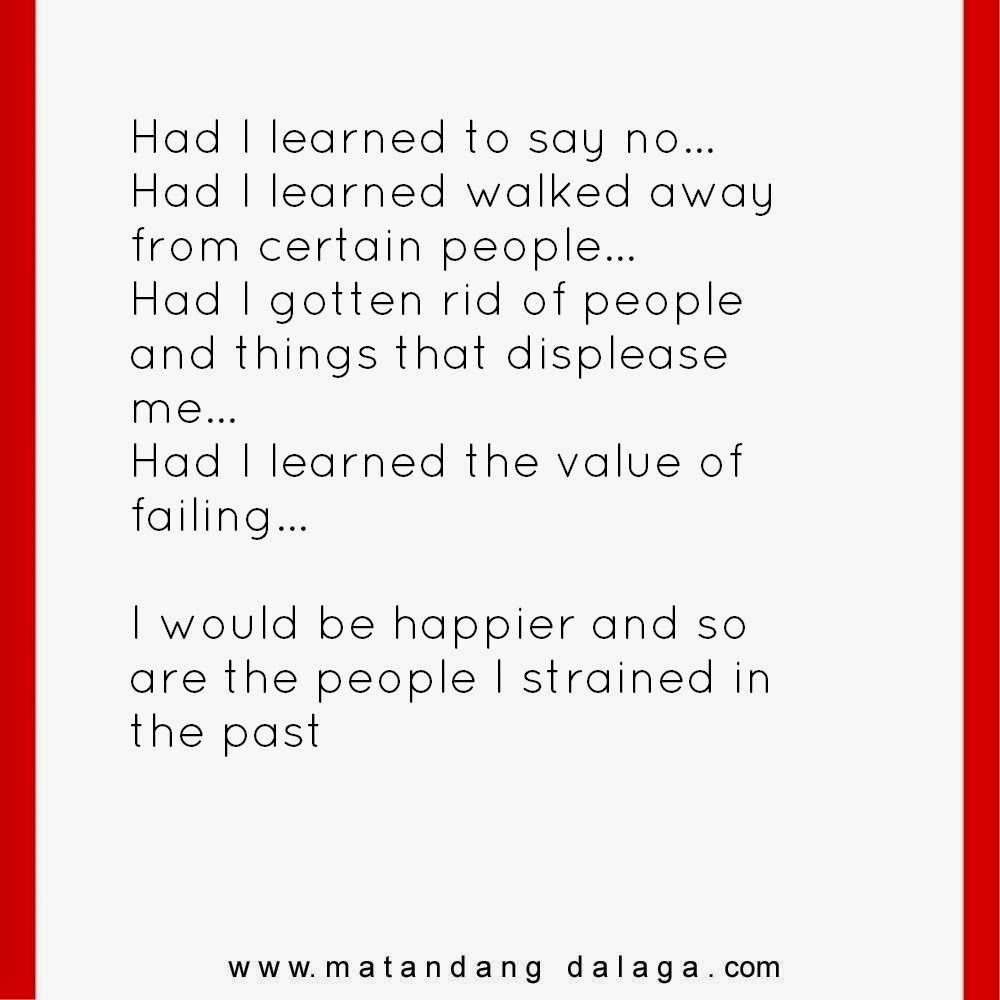 Most of the bullshit we go through is really self-inflicted. Our stupidity, hard-headedness and misplaced romanticism make us do certain things even though we know we are steering towards a train wreck.


I had a friend who was a pathological liar. I kept on with her thinking she would be "different with me". In the end, she ripped the closest clique I had at work and almost destroyed my relationship with my best friend.


Age, luckily, comes with an optional gangsta attitude. At some point you start not giving a f%$# at things you should have never given a f$%# to in the first place. Perhaps, had I learned things things early on, maybe I would be in a better place, happier and so are the people I strained just because I didn't have the courage to stand up for myself.

It's okay to sacrifice some of the things we want for the people we care about but you need to accept that continuing to do favors for people who wouldn't need if only they make the rights decisions, be a better person and get on their ass to get things done makes you just as the guilty as the person taking advantage of you.

Earning the right not to give a damn.

I should have said no to that manager who kept on asking me to do his reports for him.

That time she lied and asked me if I believe her, I should have said even if it means rubbing her lies in her face.


I don't mind giving up my vacations, better car and other luxuries to help out in nephhew's education but it only allowed you to continue being lazy because someone would pick up after you.


There is a certain selfish satisfaction found in helping people but when it started becoming obvious he was doing it to get attention, I should have said no when he asked for help.

#2- Get Rid of Things (or People) that Displease Me


I don't have to listen to anyone lambasting someone's faith, race or personal life just because it makes them sound smart. I don't have to explain my decisions to anyone who can only criticize me when I don't hear it. If you can't say something about me that you don't want me to hear, you should say it to anyone.


He was the kind of friend that would drive 100 miles at 2am when you need him but he openly expected that I keep his extramarital affairs from his wife who was also my friend. I didn't want to lose his friendship and I wanted to keep the group together so I tolerated it. In the end, I lost him, his wife and all the other friends I had.

I should have asked for a higher salary than that manager who can't even do his own implementation plan.

There are people we meet that we knew from the get go isn't the kind of person they make themselves appear to be. We feel it in our gut but we deny it because we think we need them or want them.


I met someone who was the sweetest person I have ever met. She was all a good friend is. At least that's what I thought until she lied for me. I should have accepted that she did it because she is a liar and that soon enough, she would lie against me. She did but she got to believe her.


There are people who are honest about who they are but we insist that they will change to become the person we need them to be. We invest on our expectations and when it doesn't get met, we destroy our relationship with.


He quit college and couldn't get a job for himself. I just knew he wasn't the kind of guy I would like spend the rest of my life with but I just continued relying on the "possibility" he will step up and be a better man for me.


The hardest thing, however, is being honest about who we are.


I enjoyed teaching but it wasn't something I could do full time. I took job because I needed a regular pay cheque. Someone had to make me realize that I was becoming a mediocre teacher one in an effort to teach all the classes instead of an inspiring mentor before I quit.

#5- Walk Away from People


I tolerated my uncle's rudeness because I didn't want cause problems in the family. In doing so, I gave him the license to disrespect my family.


I knew she was stealing from her parents. I kept on with it because I thought I was the only friend she had left, until her parents accused me of being the band influence.

Time is always valuable, always cruel and always passing. That's why we should never waste a single moment to get to where we want or need to go.


That's also why it needs to be cherished and experienced. Once it is gone, it is gone forever.


I should have spent more time talking with more people, friends, strangers, acquaintances, enemies. I should have listened to their thoughts, their stories and I mean really listen.


I should have felt the sand against my feet longer whenever we went to a beach. During those late night group work, I should have observed people more, watch them more, listen to the tone of their voice and not just their words because those things reveal more.


I should have laughed harder and screamed louder whenever I get scared at those low budget stupid movies I watched with high school friends.

Failure, as I know now, is necessary for success and happiness. The harder you fail, the stronger you become. Having nothing of it, means you never tried to become better.


Failure is something that you should be more proud of than success.


Had I learned that, I probably would have taken more risks and tried to get more things and be better at what I do.


Had I learned that, I would be richer and happier.

Persistence take courage but so does quitting when it is the right time to do so.


I should have quit that relationship the minute I realized I was outgrowing him. I would not have hurt him as much as I did.


I should have stayed longer in some of the companies I worked for instead of jumping at the next company that offers a raise and promotion.


I should have quit that school because it didn't teach me how to love learning.

#9- Listen to My Parents

Had I taken naps, I would be taller. Had I eaten healthier foods, I would not be overweight. Had I been more protective of myself, I would have not gotten hurt by others. Had I studied harder, I would be smarter and offered more opportunities.

It's not about being skinny and looking good in that dress. It's about having the right physical, emotional and mental health to make the right decisions, having the energy and stamina to pursue my dreams.

Things I Do to Look Younger.