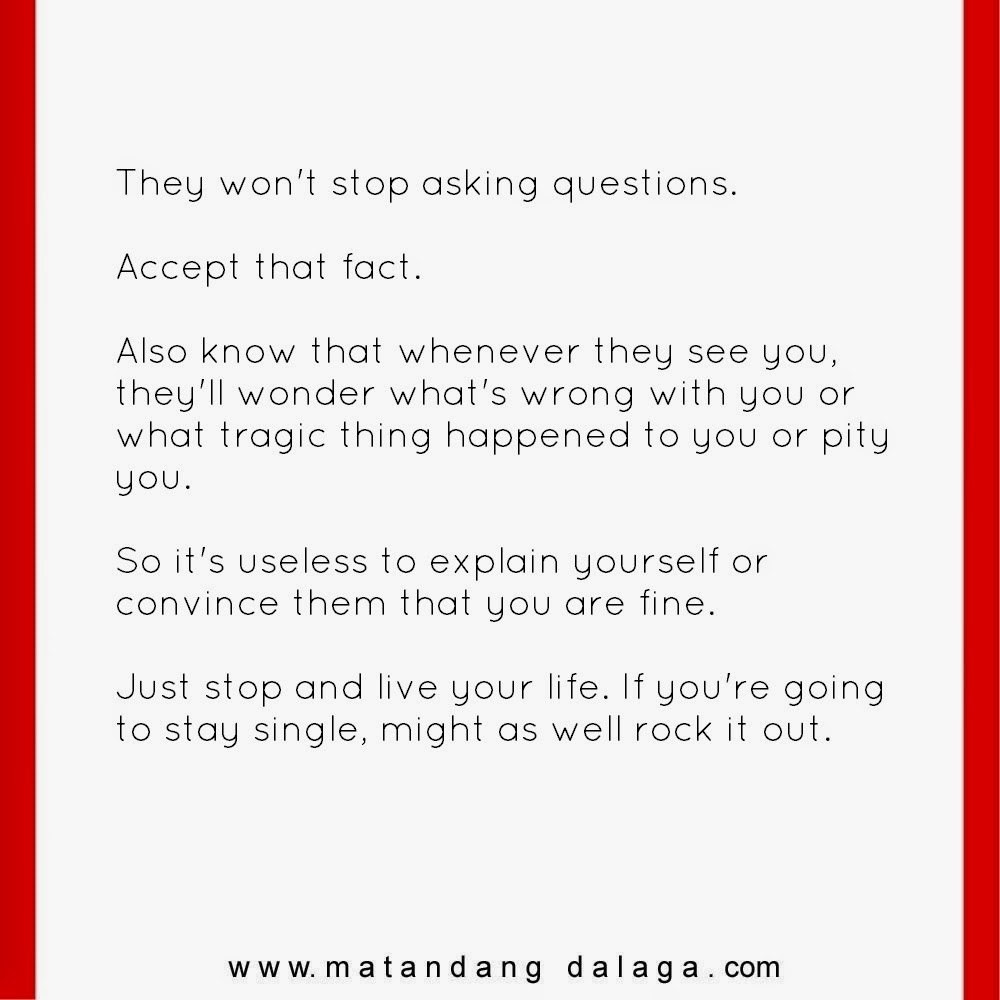 They won't understand why you are still single.

Especially those who already found someone they want to spend the rest of their life with. After all, we are all social species. We are not designed to be alone. Even the most introverted person, still longs for companionship at times.

If I had a nickel for every time I get asked why I am still single...

There was a time I tried to explain why.

After all, how could I tell them I was in a relationship with a man I didn't love and see no future with and was just keeping him because I was scared to find no one else.

There was a time when I twisted the truth. I told them he cheated or that I was planning on moving to the U.S. and he didn't want to.

After all, how could I tell them my boyfriend cancelled our wedding and didn't even bother telling me?

My ex broke our engagement but didn't have the b@ll$ to tell me. Click here.

There was a time I ignored the discussion and the truth. I buried myself with work and let my achievements build a shield around me.

After all, how could I tell them even I don't know the answer?


There was a time when I was slowly figuring things out and I wanted to convince everyone I was doing fine.

After all, you have no responsibility to explain your life to them or the decisions you make. Part of the privilege of being a matandang dalaga is the right to be a beeotch. You can all tell them to eff off, verbally or mentally.

Things we all NEED to learn but were never taught in school.

Just as long as you know you are fine. You won't be fine some of the time. There are times when you will see something or watch something or feel something and you will suddenly some silly form of sadness and that's fine.

You'll bounce back. As long as you continue to pursue your passion or do something worthwhile or do something you know you won't forgive yourself if you stop doing, you'll be fine.

They won't stop asking question. and they won't stop wondering about it. Accept that fact. Also know that whenever they see you, they'll wonder what's wrong with you or what tragic thing happened to you or pity you.

So it's useless to explain yourself or convince them that you are fine.