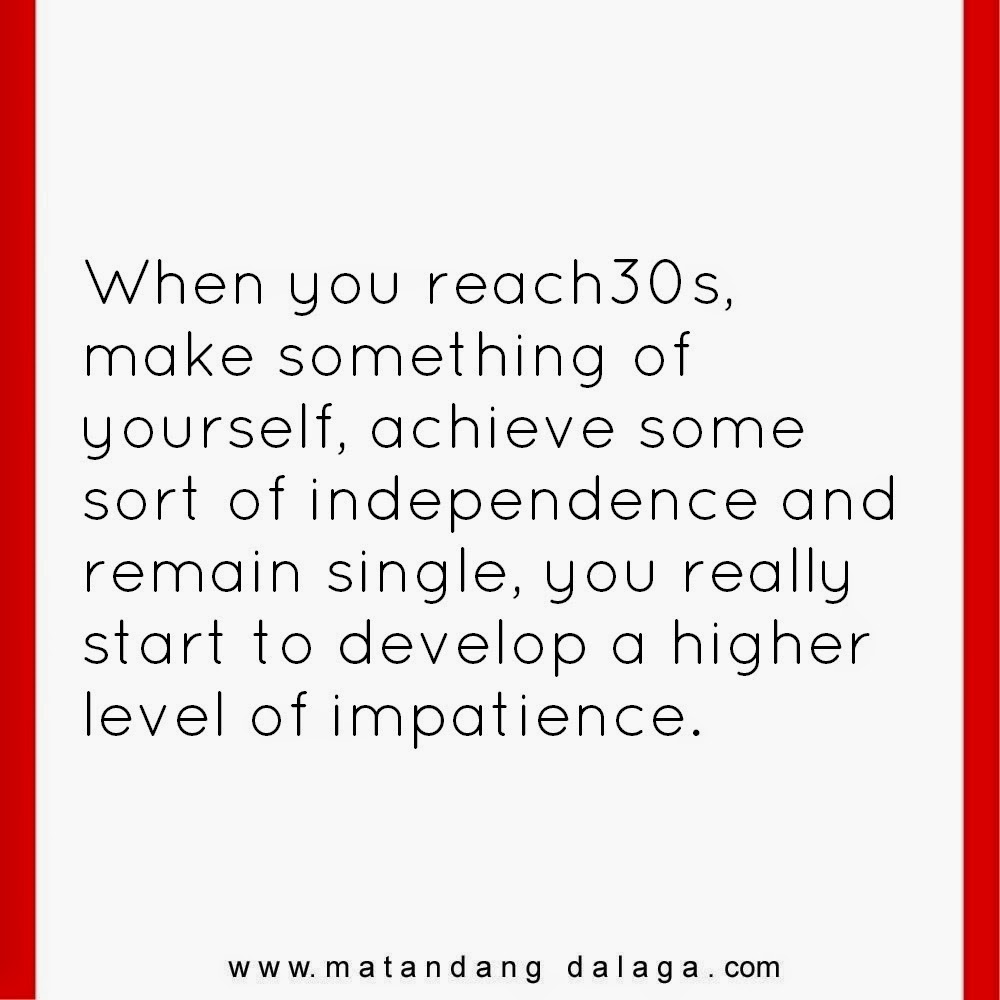 When you reach your 30s, make something of yourself, achieve some sort of independence and remain single, you really start to develop a higher level of impatience.

You start looking back at the choices you made in your 20s and you could actually shudder at how stupid you were.

I don't know how I lasted more than five years in a relationship with a guy who had no dreams. I constantly had to drive him to think about his future. I literally made his resume and looked for a job for him. I had to tell him to save (he didn't) and help his family in some way.

I don't know how stayed friends with a pathological liar, leach from a swamp, backstabber and hypocrite.

I don't know why I lasted more than six months with a boss who constantly took credit for my work.

I don't know how I lasted a year with a guy who wouldn't call for weeks and constantly compared me to his ex.

Do you like "bad boys"? and do you even know why?

It may be because I was also still trying to find out who I was and felt undeserving of some class, maturity and decency. Maybe.

All I know is that as I get older, I become more impatient and less tolerant of bullshit and crap. When I meet a 35-year old guy with great abs who thinks he is the next Adam Levine, lives in a garage and is on welfare while he spends eight hours of his day in Malibu surfing, I yawn at the dullness of the cliche.

When I meet a guy who can't even decide who among the 15 women he dates does he really want after more than six months, I feel tempted to prick him with a needle to deflate his ego and check whether blood is still flowing to his brain.

There's just so much I can't take. Infidelity included.

Infidelity isn't about love, really. It's just vanity. Having someone else make you feel important, desired and needed the way you felt when your current relationship was new and hot. All these talk about loving two people at the same time is just bullshit.

Love doesn't harm and using the "I'm only human excuse" is so 60s.

Then there these men with illusions of talent.

When you are past your 30s and you still can't pay your own rent or you are still a struggling actor with nothing but one appearance in TVC where you were at the back of the crowd, it isn't about the lack of opportunity or living for your passion, it's about the lack of vision, dream, desire to work and/or skill to get yourself together while you relentlessly pursue your dreams.

Financial and emotional independence has nothing to do with lack opportunities to succeed in your passion. When you past your 30s, you must have had enough time and brain cells to realize that passion is not an excuse to be a burden to someone else.

The classic "big boys" is there too.

When you use up all your money to buy toys and leave nothing to emergency situations or outstanding bills and other needs, it's not about nurturing the child in you, it's about immaturity. It's okay to spend on those magic cards and limited edition Spiderman statue if you can  afford it.

I managed to work two jobs so I can pursue my love for writing while I earn money to buy myself a house, car and rely on no one for my needs.

I won't be pulled down. I would much rather invest my time on my next book, hiking, biking and traveling than being a caregiver to a 30+-year-old man whose only health deficiency is his emotional and mental maturity.