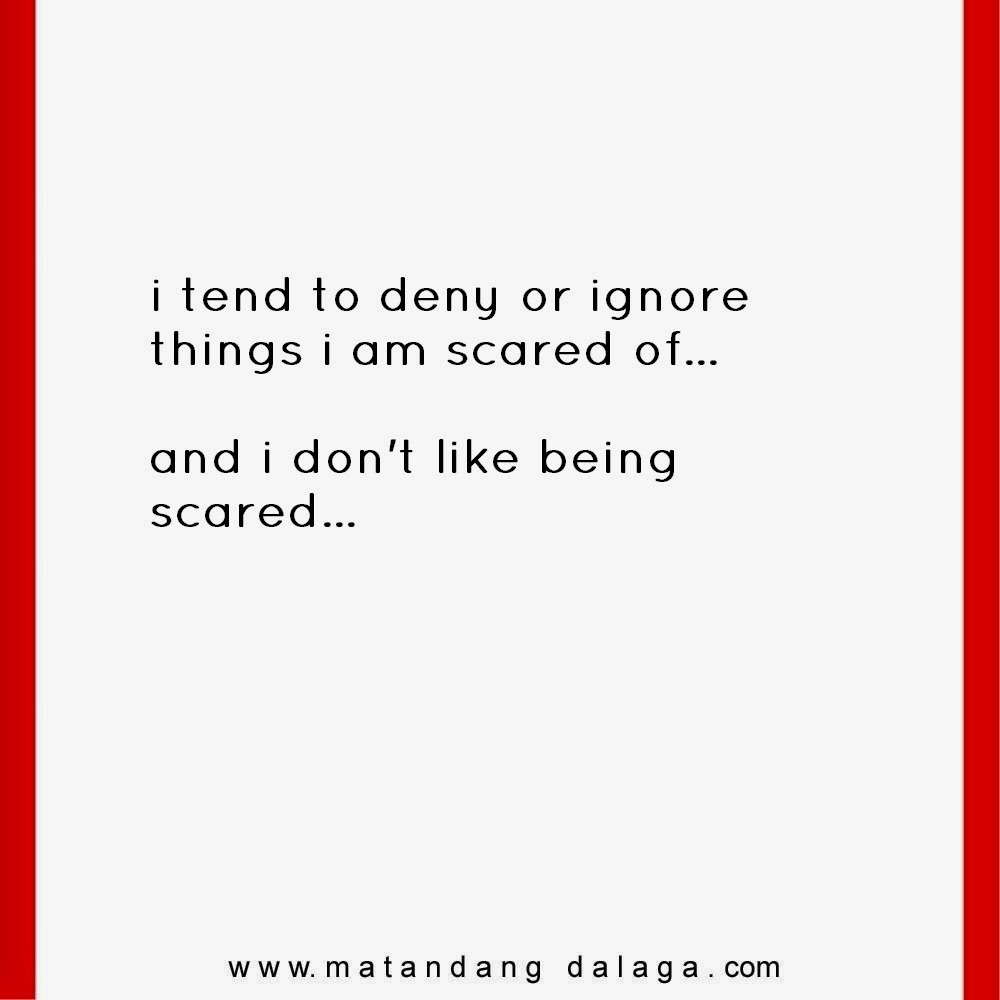 No matter how badass and cool I try to be about being a matandang dalaga, there are still those d@mn moments when things creep on me. This thousands of years of tradition that dictates a woman should be married and bear a child could still pound strong enough to break the walls I've have worked so hard my entire life to build.

It's not easy to admit either. After all, I have pride.

Doubts and questions still get into my head. I try to push them away as hard as I could. It doesn't help me to dwell on them but I realize that denial is never a solution to anything. I am obviously scared of these questions or the possible answers to them. I know because I have come to realize that I tend to ignore things I am scared of and I don't like being scared. As Nerd Stark said, it is only when you scared can you be brave. If I am crazy enough to have these thoughts, I might as well be crazy enough to say it loud. Maybe dwelling with these questions a bit longer will

Time to confront the demons under my bed.

1. Of the billions of people in this world, not a soul finds me worth fighting for

2. How much of this is really my choice?


The truth is that I would have been married now if my ex-boyfriend didn't call off the wedding. Whether or not I would have regretted the decision to get married is one thing but the fact remains that I had no plans of calling of the wedding.

How can I honestly claim that being single is really my choice?


So... this is how I am bound to stay the rest of my life? I'll wait for when my friends would invite me for thanksgiving, Christmas and New Year. Stick with


Was it me who made the wrong choice in my two previous relationships? Did I spend years of my life with the wrong person? Or was it the other way around?


Just the other day, a woman sitting beside me in the bus had such bad body odor that I literally got a headache by the time I got off the bus but she is married and I'm not.

I saw that girl from high school who was hailed to be the ugliest in our batch, pretty stupid and a b!tch and she's married to a relatively good looking European.

That girl three-timing woman who obviously dated only men who had money is now settled with three kids... she also got a millionaire she has always wanted.

All of them... are they better than I am?

7. The other woman won


That girl, the other woman, she's married now. No, not to my ex-boyfriend but to another man but she did break me and the guy apart.

(Yeah, yeah I know people are going to say that I actually still won because I was able to break free from a guy who can't stick to one but I have already mentioned in my intro that these are questions that creep into my when logic isn't always winning..)

8. Am I really okay with this?


The whole blog is dedicated to helping me and, hopefully in the process, help others be okay with being a matandang dalaga. I try to make the most out of what I have. I try to grow as much as I can as an individual. I try not to be defined by my civil status. I try to look at the brighter side. More than half of my friends who are married are married to men I wouldn't want to marry for all sorts of reasons.

I concentrate on what I have and the good it brings.

Am I really okay with this or am I just being forced to be okay?


Of the thousands of words I have written in my bid to prove that I can be happy being alone, I can take care of myself and I can make something of myself, how much do I mean those things? Do I really mean that being and 'independent woman' is much more important than with someone or is it this my survival instincts kicking in?

10. Am I that unattractive?


I've mentioned in the past that I am the most unattractive among us cousins. I'm okay with it now. I doesn't bother me anymore but am I that unattractive for no one to be attracted enough to approach me? Am I that horrible of a human being for anyone not to want to stay with me?