When Quitting May Not Be a Bad Thing 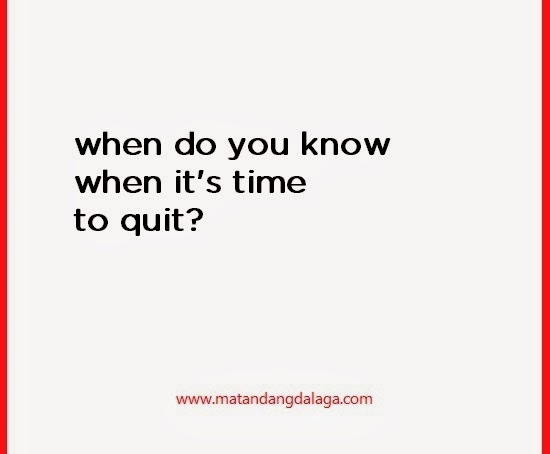 I have a lot of bad habits but quitting is not one of them.

I am not sure if it's something my parents taught me or something innate but I know that when I start something, I finish it. The end product may end up bad but I won't quit until it's done.

That's probably how I ended up staying with my first boyfriend for almost 7 years. I just wanted to see it through, make sure every stone is turned and every option taken.

Now, I know I should have quit the first time I realized and felt he wasn't the kind of guy I could spend the rest of my life with. I should have moved on because now I know there were lots of opportunities I let go, people I could have dated and things I could have done.

However, I know that now only because I knew how it ended.

That's what's bugging me now. When do you know when it's time to quit?


When I focus something, I get so focused that I am able to block out everything else. I exhaust all resources and, often, I go beyond what I think I can do to get to the goal. I don't have a high success rate. I fail more than I care to admit. I fail so often that I actually do get a shock when I actually do succeed.

I don't dwell on my failures a lot. I guess it's a defense mechanism. My tendency is to move on as fast as I could but on days like this, when my body is filled with MSG (and I don't like it), I do something I rarely do, I think about the past.

It's an odd thing, actually. It's like an out of body experience. I feel like I am watching someone else and I see lots of moments when that person could have explored something else with greater chances of success. I see lots of times when the supposed "trying" was actually nothing but a waste of time.

I see that there are lots of times when the end didn't make the means worth it by a long shot. It wasn't just my first relationship but a lot of other things I have done. I am where I am because of the decisions I've made in the past but what if quitting some of those things I pursued in the end would have pushed me to a better place now?