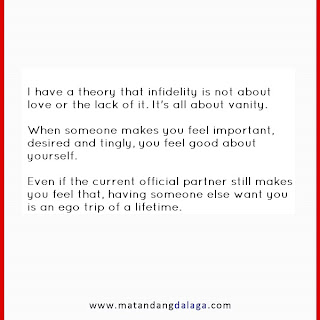 I have a theory that infidelity is not about love or the lack of it. It's all about vanity.

When someone makes you feel important, desired and tingly, you feel good about yourself.

Even if the current official partner still makes you feel that, having someone else want you is an ego trip of a lifetime.

My first boyfriend cheated on me on the third year of our relationship with a girl he met online. I know… such a pathetic cliché.

He mentioned the girl once. Let’s call her Roberta. He said she plays one his online games with her. I didn’t think much about it because I used to play games too. I know you interact with other people all the time.

Click here to read about how to determine if your boyfriend is still not over his ex.

As time went on, he would usually cut our dinner or evening conversation short so he can go online and play that game he is playing. One time I we were having dinner at his place, he even played the game while I was watching TV. Yes, he was chatting with Roberta. I got curious because I thought it was borderline impolite.

No, I didn’t suspect anything. I just told him I was going home seeing how busy he was.

So I ate alone… well, I gave my dog some.

Click here to read about how my ex DIDN'T break up with me.

I saw him two days after and he said his friends “kidnapped” him. He was on his way home and they pulled him into the van and took him swimming and he didn’t have anything with him and he couldn’t charge his phone. Okay. “Well, happy birthday.”

I don’t have to tell you where he really went. I learned about it about four months after because I finally asked him why he wouldn’t spend weekdays with me. The asshole cried and said he wanted a break up. he said he needed space. In my head, I was thinking men should really become a damn astronaut. They all need space.

p.s. It was a full month after did I learned it was because he has been seeing the girl he met online every weekend when the girlfriend’s ex-boyfriend tracked me down. dafuq!
30 and single matandang dalaga funny stories Must See Foreign Films tips from a matandang dalaga