“Admit it, You Wish You are Married.” 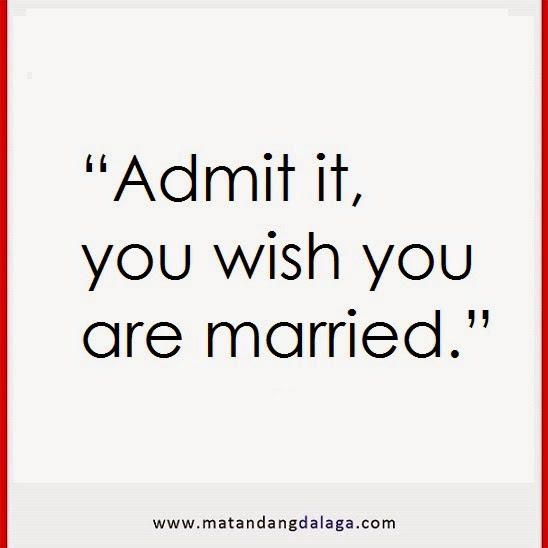 That was delivered with unbelievable amount of certainty and undeniable intention to insult my status and age. The message was clear – don’t be a hypocrite, you want to get married and you’re not and you’re not happy because you don’t have that one thing that will complete you.

I used to lie a lot but I already made a promise that I will avoid doing it as much as I can. So no, I won’t lie and I certainly won’t be a hypocrite.

Sure, I wish I am married.

All my cousins are married and they all have children. I look at their children sometimes and am amazed at how they were able to raise such beautiful children considering how fucked up we all are. I am not kidding. My nieces and nephews all look beautiful and most of the time, they are beautiful inside too. Some of them are probably breaking hearts already.

I hear their stories about their marital problems and the clarity that comes once they solve it. I look at their photos with their family and the pride of my uncles and aunties on their grandchildren.

Read about the curse on Raymundo women here.

Yeah, I wish I am married… some days.

It is the same way married people sometimes wish they are single some days.

I look at my female cousins all of them are either separated or miserable. Each time, I always find myself sincerely thankful for being single than being in any of their position. Yes, I do think their children trumps any benefit of being single but I know for sure that I will have mine someday. Whether it is biological or not is still up in the air. So, I am not really worried about the baby thing.

I am not sour graping but I would rather not get married than be married to someone who will fucked me up even more than I could to myself. I have enough problems all by myself, why take on someone else’s.

Yeah, there are moments when I wish I have someone with. It comes in waves and sometimes, the desire is so strong that I blame my parents’ genes for not making me attractive. But it goes away just as fast and when that calmness hits me, I realize that I’m fine. I’m okay… that given everything I have been through and where I came from, I’m fine.

I know that there is so much more I am bound to do and experience and I will not put my life on hold for a guy I haven’t even met. I will live and I will be happy.

If my “Amal” comes along, then I won’t hesitate to say “I do” but if he doesn’t, I know I’ll be just as fine. I would rather be single than choose a stupid lunatic with no backbone.

Yeah, I wish I am married… some times. Most often, I am ok… jazzy and peachy. I don’t have anyone beating me up or sleeping with someone else while they sleep with me. I don’t have an extra mouth to feed or someone I am stuck with who don’t even know how many senators we have in our country.

Yeah, I wish I am married… some times. Most often, I wouldn’t have it any other way.