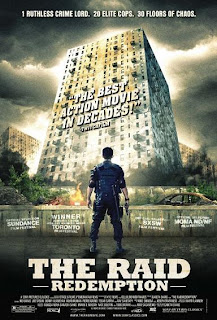 There's no mind-boggling puzzle to solve.

There is no open ended ending that will haunt you for the rest of your life.


A team of police officers raids a building that is owned by a wanted criminal. When the criminal learns that they are being raided, he announces that whoever kills the intruders may live in the building for free. Apparently, the building houses Indonesia's most dangerous criminals.


This has the best action sequence choreography I have seen in years. It will most likely land on my top 3.

The fighting sequence used an Asian martial arts called "Silat". It is characterized by short and quick movements targeting vital parts of the body to immediately and easily incapacitate the opponent. It's primarily a bare-hand fighting style but it also teaches the use of knives and sticks.

For a change, The Raid doesn't feature gravity defying fighting sequences. People pretty much stayed on the ground and when they jump, they get back down on the ground in a pretty much physics-accurate kind of way.

The fighting sequences are fast but not too fast that you don't anymore see what's happening which I appreciate. At least, I am able to identify who is punching and kicking who.

It also very clearly show breaking bones, exploding organs and bullets and knives going through people's body. Yup, it's graphic and it's violent and it is not shy on  giving tight shots to those salivating, perspiring, dying people, specifically, their body parts that are being blown or shot.

It's a classic hand-to-hand combat and you will get that kind of excitement you get when you watch UFC, just multiply it by 10. It's like watching people beat each other up right in front of you. It's realistic as realistic could be.

Watch it for its action sequences. You will not be disappointed in that aspect.