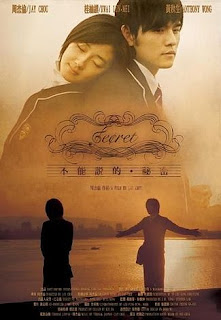 Secret is a 2007 Taiwanese film that was written, directed and starred by the musician Jay Chou. Way to save some money which he didn't have a lot of as far as I understand.


Ye Xianglun (Jay Chou) met a girl in school to where he just transferred. The girl, Lu Xiayu (Gwi Lun-mei), plays a piano piece which she specifically told him not to play in the old piano in the music room. After a series of puzzling events, it was reveled that the girl is actually from 1979 and a student of the guy's father. She travels back and forth in time by playing the piano piece she found in the piano room.

There's a catch, only the first person she sees when she travels forward will see her back. That's why she devised a way to make sure she sees the guy first. However, after several mishaps, she thought that the guy developed a relationship with another student so she traveled back to her time and didn't come back. Apparently, she died of asthma.


The guy learned about the story of the and realized that he can travel back in time if he plays the piano piece in the old piano room. It was already being demolished so he raced against time to finish the playing. He was able to go back to the time before she died, saving her life. However, he stays in the past forever.


I left out a lot of details obviously but that's essentially the major plot points.

I am very critical when it comes to love stories because I am cynical when it comes love and relationships... in movies... and real life... and sometimes I am stupid and insane (dangerous combination) to not be able to separate the two.

I am always critical on the concept of "love". In this case, I don't understand how she could even think this will end well. She's from the past and he is in the future with a family who loves him. She has a family a loves her. Was she thinking she would just go forward in time and leave her family and life or ask him to go back in time and leave his family and life?

Yeah, they are in high school but it doesn't change the fact that what she did, teaching him the piano piece knowing he would eventually figure out, was extremely selfish. No, don't get me started on "but he loves her too" defense. She was the one who had control over he situation, she should have made the right decision.

Other than that, the narrative is pretty solid. It could get confusing to people who don't pick up fast especially because she never explicitly said "I go forward in time" to anyone. It was shown but I personally initially thought there was a loop in time rather than time travel.

One thing is sure, though, it is a decent movie. It's a different love story and I have never seen a story exactly like this yet. It would, at least, make you feel you are respected as an audience and not insulted by being given totally cliche plot lines and bad acting.

All in all, still worth watching.