38 and In Love for the First Time 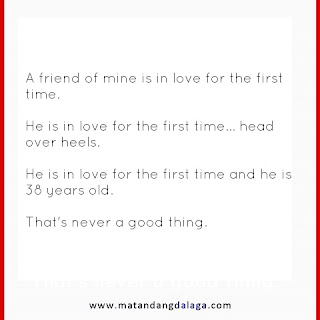 A friend of mine, 38 years old, from a very good family and has a stable job but never had a girlfriend. That changed early this year. He finally got someone who is formally committed to him. My friend has a girlfriend and he is in love... head over heels and very very happy.

They are three months into the relationship. She has met his parents and he is about to meet hers in the next couple of days. There's nothing wrong with that.

Then he raised something, the girl might move to another country soon and she asked him what would be of them. Our friend wants to marry her.

Whirlwind romance are not unheard of and many have worked out but based on all our compounded experiences, it's rare and certainly not advisable.

There are things to consider in all these. Is he going to give up everything he has to follow her? And how about his dreams here? He said her dreams are now his dreams.

They've never had sex and he said it looks like she wants to wait until marriage. The married ones in our group objected, women and men. They said it's important for both parties to know whether they are compatible with each other.

Sex is important in a marriage. Virginity may be romantic as an idea but it's lasts one night. Sex, on the other hand, is something you have to keep on doing until you can't do it anymore.

Romanticism is great but i f you think it will carry you through for life, that's never a good thing.

We told our friend to wait, don't go doing things with permanent repercussions like getting married or moving to another country while he is still so in love but he is in love... for the first time in 38 years. He is not listening.