Things Worse Than a Heartbreak 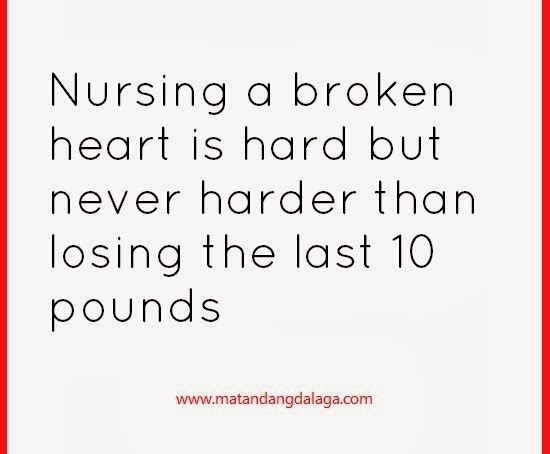 Heartbreaks suck especially if you are the one that got left behind. The thought of not having the bragging rights in the future that it was you who dumped your ex is scary but no matter how bad it may seem, there are things worse than a heartbreak. If people will only learn how to remember these things when they want to kill themselves after a breakup, this world will be a better place.

I have been on a diet since I arrived. It has been four months and I still look like a cupcake. My waistline is still nowhere to be found and the sides of my tummy still look like the silhouette of a cupcake when I wear jeans. Prior to that four months, I went on a fruit diet back home. I did it for one year and I still didn't lose weight. That is 16 months of dieting in total. Six freakin' teen months. I was over my last boyfriend after three months.

Have you ever had one of those days when you are in the middle of a very important meeting and your s#!t is pushing its way out of your @ss? Like you really have to curl up your @ssh0le just to keep the dump in?

Have you ever had one of those days when you are running around looking for a restroom because your dump is just about to fall out of your @ss? Then you finally see a restroom and there are 20 people on queue?

Have you ever had one of those days when you realize that the pizza you just ate refuses to stay in your tummy but you are in the buss that's on the highway and it hasn't moved for 10 minutes and it looks like you won't get to your destination  for another 2 hours while your poop feels like it will get itself out of your body in less than 2 minutes?

Have you ever farted and realized that a tiny bit of sh!t came out and you are wearing white?

Because you are torn between knowing your armpits will start smelling if you don't take a bath and freezing to death from the time you get out of bed to that time when you soak your body with very warm water. That 30 seconds or 1 minuted (depending on the distance between the bathroom and your room) is the longest walk you will ever take.

Click here to read about society's obsession to ask about when someone is settling down.

But there are less than 1 percent of humanity who figured out calculus. Calculus is evil. It's just one of those things that was developed or discovered, whatever the f#$k you want to call it, for the sole purpose of humiliating majority of humanity. It's one of those things that don't make sense even though it does. Of course, my disdain from it is inspired by the fact that I suck at it, big time.

I have recovered from heartaches and I am still in one piece. I am also confident that if I do get another one, I will get through it again. It's just a matter of time. I never quite recovered from simply seeing a calculus problem and it has been 15 years.