There he is, the Kind of Pope WE ALL Need 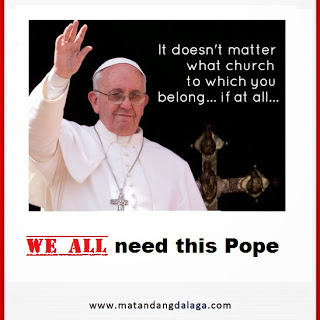 It doesn’t matter what your religion is, WE ALL need this Pope.

I came across an article that enumerated several declarations and actions that the Pope made in his still young run as the “infallible one”.

I admire how he made a stance for the homosexuals. He didn’t categorically say that homosexuality is not a sin but he didn’t say it is either. He only stated what may be the ‘Godliest’ thing we can ever do towards those who seem different and that is to not judge.

Our interpretations of God’s words, regardless of what scripture we refer to, are actually just that, interpretations. Anyone who claims to fully understand His words is arrogant and ultimately stupid. We will never have the certainty because our understand, comprehension and purity will never measure up to Gods’.

And that’s why we should refer to love and hope and faith… not judgement.

I admire the Pope’s courage to go out and say different religions are worshiping the same God because if you go and understand every doctrine, it all boils down to the same message, faith, hope and love. The devil is in the details.

More importantly, he acknowledges the one basic fact many miss. Those whose “faith” is different has as much as certainty on their faith as the others. They are just as certain that their interpretation of God’s word and God’s will is the right one. So to quote Pope Francis, “What other kind of truth is there?”

Others call him liberal and a few call him modern. I think he simply LOVES. Finally, we have a religious figure in authority that truly ACTUALLY look beyond religion, race and gender. For all the preaching that other religion has done about loving as purely as God did, Pope Francis is the one that seems come close to what it actually means.

There are still some things Pope Francis must do.

There are priests that abuse children, priests that rape boys and girls and women and men. Despite overwhelming evidence, they go unpunished. The Pope needs to make sure that those who made a sacred vow to serve God must suffer greater punishment  for sins like this.

Then there are priests who are married. I think priests should be allowed to marry but it is a rule they imposed upon themselves, a vow they voluntarily made.

Then, there is the lavishness. Priests drive cars 90% of the world will never even touch. They drink wines expensive enough to pay an employee for a week and take vacations on islands no one has ever heard of.

It has to start from the top too. The Catholic church owns some of the biggest shares in some of the biggest corporations in the world. There is nothing bad about making sure they have enough money to sustain the operation of the church but when Cardinals and Priests start drinking from gold plates and wearing robes that could have clothed 1,000 poor people, there is something amiss.

The Pope is off to a good start but he has a long way to go and I pray that God give him the courage, strength and protection to finish what he has started because God know how much we need him to REGARDLESS OF OUR RELIGION OR LACK OF IT.
matandang dalaga update old maid