Of Standards and Men 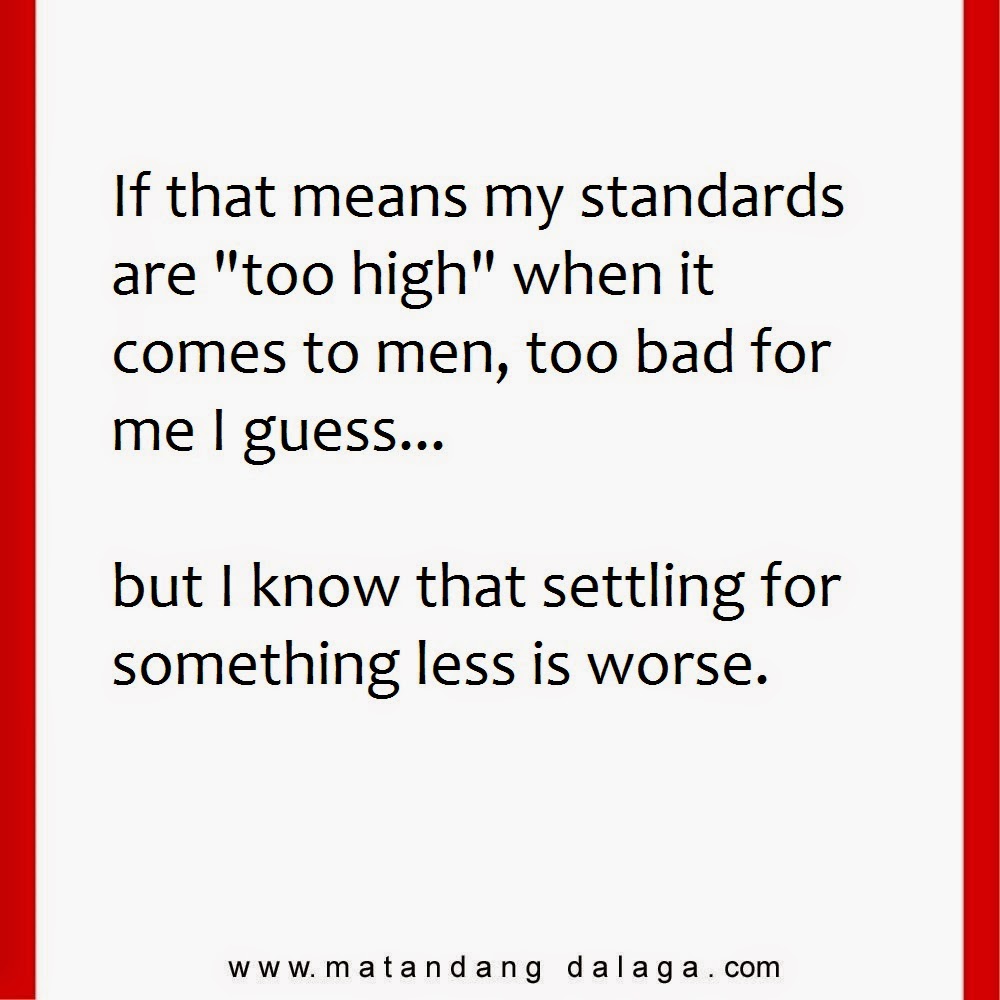 Two. That’s the total number of dates I have been on since I moved to the US.

I am getting closer and closer to the magic 40. I have no prospects. My Filipino friends are worried but almost all of them keep on telling me they can’t find me a date because my standards are so high.

I don’t know where they get the idea.

It was only recently that I realize what kind of relationship I want and need.

I have never wanted a mansion or a Brad Pitt. I prefer simplicity.

However, the sheer amount of people telling me this has prompted me to actually rethink this whole thing.

His resume is a list of who’s who of the most successful investors in California (his words, not mine). He drives a great car and was born into a family that made it to the Top 20 richest Filipino families. He has an MBA and a great house.

He did everything perfect on our first date. He was a perfect gentleman, asked the right questions and shared the right stories.

He has three beautiful kids and two ex-wives that still care for him but at 40, he still blames his mother for his two failed marriages. It is because her mother meddles and too overbearing.

He got everything right but he can’t take responsibility for his own life. It was obvious why his two past marriages didn’t work and his mother had nothing to be with it.

"Call me when you grow up."

I would like to be with a guy who doesn't need a woman to become a better man.

He is 32 and is determined to become a star. He is a music producer but feels it is time for him to step into the spotlight and become the next Pharrell. He wanted the world and he is sure he can get it. He wanted me too and made sure I knew it.

He is not bad looking and he actually has some amount of talent. He is no Michael Jackson but since when did talent become a requirement in Hollywood. He knows that too and I respect for it. He does not pretend to be an artist, he just wants to be a start and that’s fine but he wanted me to figure out how to make him a star.

"Call me when you become one."

He likes me but he needs time to figure out a way to break up with his girlfriend without hurting his whole family.

“Call me when you grow a pair.”

He likes me. He has a clear idea of the kind of relationship he wants. It is one that involves me not going unless I am with him. He expects me to report to him where I am going and make it a point to call him at least once a day. He needed to make sure I know how to cook his favorite dishes and eventually move to Chicago.

He likes me. He listens to what I want and gives me enough space to do my own thing. He is simple, so simple that his idea of happiness is buying the latest Xbox games. There is nothing wrong with it but I want someone that will share my life, have a conversation with, spend silence with and someone that will challenge my intellect.

“I”ll call you when my nephews need someone to help them hone their WoW skills.”

He likes me. He is a nurse. He is still friends with all his exes and that is fine but he can’t seem to stop flirting with all of them. Worse, he is not even aware he is doing it.

He likes me and he has a stable job. He lives on his own and knows what a 401k is. He loves running, the beach and outdoors. He loves going out with his friends. However, I started doubting whether he loved nature or the opportunity to show off his abs. We talked about sports and movies and traveling but anything that involved some serious analysis like politics, philosophy and humanity and he starts yawning. Too bad because I loved his Bentley until I learned all he could really afford was a Toyota.

I don’t know if I have high standards but I know for sure that unless I end up with a guy that knows enough about politics, history, social issues, and sports… a guy who cherishes the learnings from travels… a guy who can do crazy things just for the fun of it… a guy who enjoys a pizza while watching a totally senseless movie just as much as going out to appreciate humanity reflected on an art exhibit… a guy who knows that eating healthy is necessary but being a slob is also fun… then it’s a total waste of time.

If that’s a high standard then too bad for me, I guess but I know that settling for something less is worse.
matandang dalaga update