Stupid, By Any Other Name Is Still Stupid 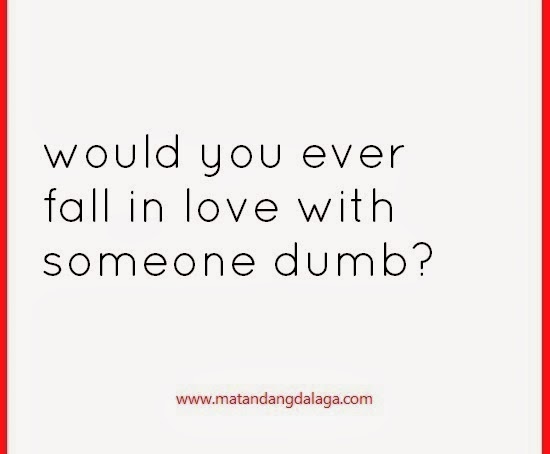 Would you ever fall in love with someone who is stupid?

Love, I have always believed, is something that grows. Love at first sight is actually just attraction. How you nurture that attraction will decide whether it will lead to love or not.

Conversation is a huge part of that process. Even if two people are more inclined to do more physical activities like play sport, hike, bike, do extreme sports, or whatever, you still need to talk while, before and after doing those things, right?

If you get someone who has nothing to say or say stupid things, how do you keep on spending time together? I am not after someone articulate. You can be articulate and still have nothing substantial to say. I am talking about actual substance in their brain cells.


Click here to read "Is he worth the mistake?"

Would you ever fall in love with someone who is intellectually way inferior than you are?

I have an auntie who is married to someone who, in their 12-year of marriage, has never had a conversation with us because he simply can’t catch up. We’re not intelligent people but we know enough to have some interesting conversations about current events, science and some other subjects that are normally talked about by people who have some sort of education between them.

He, on the other hand, does something consistent whenever he attends family gatherings, he sleeps. In all fairness to the guy, he is good at what he does. His passion is working out and he works out a lot. He is one of those buff guys whose body seems to puff out of his shirt all the time. However, he doesn’t seem to even be good at being a Physical Trainor because he can’t even keep a job at any gym he works in.

So, I wonder… what does my auntie and he talk about? How did my aunt fall in love with him? I assume they went through all the normal process of spending time together, talking and doing things together before they actually fell in love but with obviously nothing to say, how did it happen?


My aunties had an actual fist fight, read it here.

I remember my aunt telling us about this one time when they were still students. He had to look for some video for a report. They went to different stores and they couldn’t find the video. The guy actually cried at the fear of having nothing to present. There is no shame in crying but over a video tape you can’t find? Dude, get your brains working and think of an alternative or look for ways on how to find the video.

I don’t know how I would spend my everyday with someone who will not stimulate me intellectually. That became more important when hit my 30s because by then, I knew more, did more, experienced more and want more. I had been to more places, met more people and achieved a bit more. My needs changed, therefore, my standards changed.

At 30, I want someone I can have interesting conversations with. So that when all things fail, at least we’ll know we can talk. That’s always a good start.
alternative career matandang dalaga funny stories old maid pinoy culture